/ Popular in Stockholm and environs > Uppsala 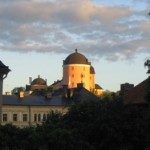 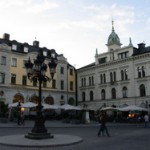 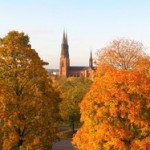 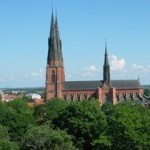 The city of Uppsala is located 66 km to the north-west of Stockholm in the central part of Sweden on the bank of the Fyris River at its confluence into Lake Melaren. Nowadays Uppsala is known as European university centre. Many outstanding scientists lived and worked there. One can mention naturalist Carl Linnaeus, astronomer Anders Celciusa, chemist Jöns Jacob Berzelius etc. But Old Uppsala was the ancient centre of Swedish Vikings’ kingdom dating back to the 6th – 9th centuries. It is located 5 km north of the modern city. Nowadays only royal burial mounds remained on the place of the formerly rich town. The famous Uppsala Cathedral is the national sacred shrine and the oldest church in Sweden. It is recognized to be the highest church in Scandinavia (118,7 meters high, with the height equal to the length). This impressive building was laid in 1260 when the population of the town made up only 800 inhabitants. The erection of the cathedral continued throughout 175 years. The church was restored for several times after several conflagrations. The latest restoration took place in 1976.